Today we're going to take a break from modeling on Thunder Mesa and step into the Wayback Machine for a visit to one of the primary inspirations for the TMMC, Disneyland's Mine Train Thru Nature's Wonderland. As a kid growing up in Orange County in the 60s and 70s, the old Mine Train ride was my very favorite thing at Walt's original Magic Kingdom. I've referenced the ride many times on this blog so it's high time to relay the story of this fascinating extinct attraction.

The original Rainbow Caverns Mine Train opened at Disneyland on July 2, 1957. Like Adventureland's Jungle River Cruise, the Mine Train played off of Walt Disney's popular True Life Adventure series of nature films. One film in particular, The Living Desert, was a major source of inspiration.

The new attraction cost about $400,000 and traversed seven acres of prime Frontierland real estate. It gave delighted guests a one-of-a-kind tour; departing the little mining town of Rainbow Ridge, round the back of Rainbow Mountain, through colorful Rainbow Desert, and culminating in the dramatic, black-lit depths of Rainbow Caverns. (With all the emphasis on rainbows, one can only assume that Walt was really trying to drive home the colorful aspect of all things Disney. Technicolor was still a big deal in those days and color TV was in its infancy. Walt's Wonderful World of Color anthology show would debut on NBC in 1961, pioneering the medium and giving many families throughout the country a good reason to buy a color television.)

A little less than three years after the Rainbow Caverns Mine Train opened, it was almost completely redone in a major upgrade and expansion. Nearly 2 million dollars were spent "plussing" and expanding the ride with over 200 Audio-Animatronic animals, a longer track plan and several dramatic new scenes. The original, 30" gauge, steam-outline battery operated locomotives and their trains were repainted a bright yellow, replacing an earlier dark green scheme, and the entire attraction was relaunched as the Mine Train Thru Nature's Wonderland in June of 1960.


A dream team of first generation Imagineers was assembled to bring the project to life. Roger Broggie, Sam McKim, Bob Sewell, Bill Martin, Bob Mattey, Wathel Rogers and Vic Greene joined Claude Coats, creator of the amazing colored water effects in Rainbow Caverns, to design, engineer and build Walt's natural wonderland. The final result was like a trip through America's great National Parks, served up with a generous salting of Disney humor and whimsy. A new, recorded narration was provided by character actor and Disney favorite Dallas McKennon, describing the amazing sites along the way and adding a charming, rustic touch to the ride. The Living Desert and Rainbow Caverns were still there, but the expanded track loop now included the sites of Beaver Valley, Cascade Peak and Bear Country; all inspired by the True Life Adventure series of films.

Let's take a ride now on the Mine Train Thru Nature's Wonderland, just as it was back in the mid 1960s.


Have Your "E" Ticket Ready

Across Zocola Park from the Pepsi Cola Golden Horseshoe Revue, and just west of Casa de Fritos is the little mining town of Rainbow Ridge. Please remove an "E" coupon from your ticket book and hand it to the cheerful cast member as you prepare to board one of the bright yellow trains that has just emerged from the tunnel. Taking your seat in one of the ore cars, you hear the distinctive voice of Dal McKennon coming through the speakers... 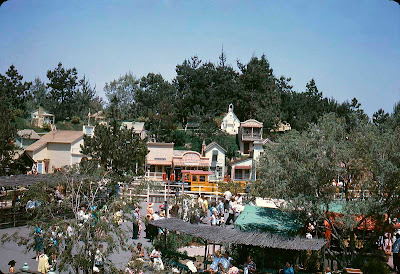 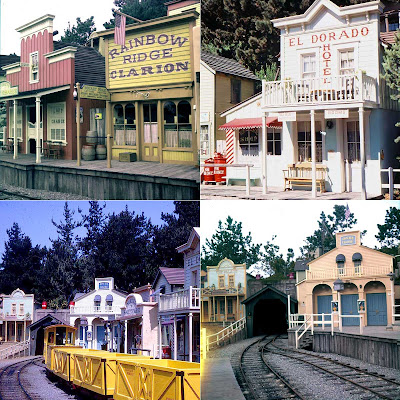 Howdy folks! Welcome to the little minin' town of Rainbow Ridge, gateway to Nature's Wonderland. Please stay seated at all times, and keep your hands and arms inside the train. The animals get mighty hungry!

The train begins to glide forward and the quaint little mining town is left behind as you pass through a dark tunnel... 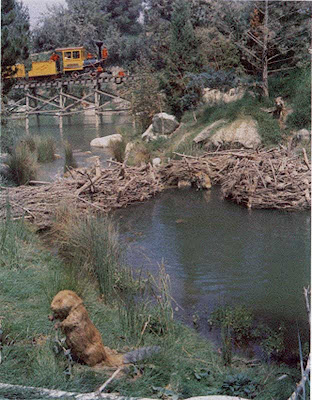 Our first outpost is Beaver Valley, where many animals come to enjoy the plush resort atmosphere built up by nature's own engineer... the industrious beaver. Up ahead, those marmots keep playing tag over the tunnel entrance... 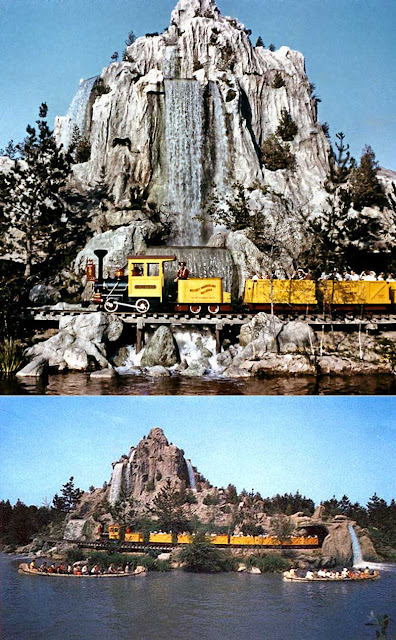 It sometimes gets pretty wet up ahead, folks. The rushing waterfalls crossing the tracks come from Cascade Peak to your right, the highest point in Frontierland. Don't worry though, everything will be okay, unless the wind changes... then we could all get a shower! 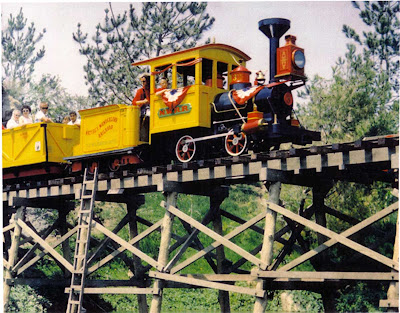 Now folks, I don't wanna scare you on this old rickety trestle, but everybody sit real still.. no tellin' how long she's gonna last! 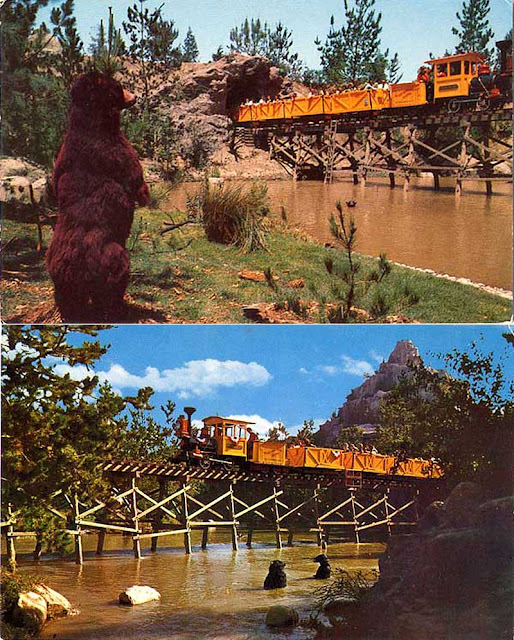 We're comin' into Bear Country now, folks... Yuh know bears are one of the most playful animals there is. Lazy too. All they want to do is lay around 'n scratch, 'n fish, 'n swim... that is when they ain't sleepin'.

The train passes below Natural Arch Bridge and starts to descend the grade into the Cactus Forest, passing beneath the trail taken by the Rainbow Ridge Pack Mules...

Ahead now is the Natural Arch Bridge, carved out of solid rock after hundreds of thousands of years of wind, rain, snow and sleet... and a little help from Walt Disney! Yuh kin see the great Living Desert down below. Yuh know, the desert's a dry place, n' full of some purty mean varmints! You gotta be careful of sidewinders, wild pigs n' even mountain lions. 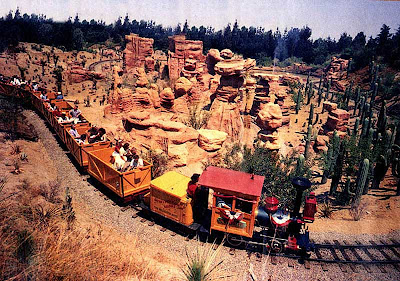 Ahead of us is the saguaro cactus forest, home of the 'skyscraper of the desert.' The heat out here sometimes affects our passengers. They think some of these cactus look like people and animals. Somebody even saw the Seven Dwarves out here yesterday! Saguaros are the desert's biggest living things, and they provide homes for all kinds of birds. 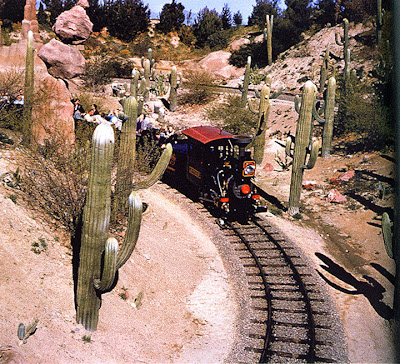 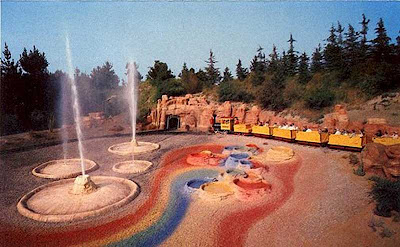 Say, ever hear of the Devil's Paint Pots? Real mystery of the desert... bubblin' pots of mud in all kinds of colors. This here's geyser country too.. uh oh! There she blows! Sure glad you all brought yer raincoats. Look out now! We never know when she's gonna go off. That's why we call her 'Old Unfaithful.' Look out now! Hey, you folks in the last cars better be ready... she's a threatanin' agin! 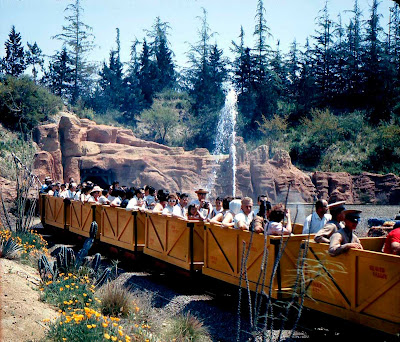 Yuh, know, I hear a long time ago dinosaurs roamed this area. 'Course all yuh find now is cactus, snakes 'n coyotes... And sometimes the sun-bleached bones of an ancient animal.

We're now comin' into Balancing Rock Canyon. Keep a sharp eye out 'cause sometimes an unwary animal gets caught on top of one of those unsteady rocks and... Look out for that bobcat! He's fallin toward the train... Watch out! That was a close one! 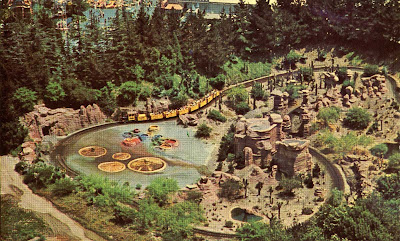 Your train now leaves the sun-filled world of the Living Desert behind as the tracks lead into a yawning cave in the rock wall ahead. A wary cougar stands guard above the tunnel entrance and Dal McKennon's voice returns as the light dims... 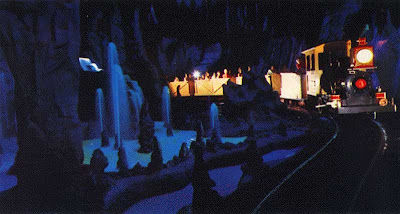 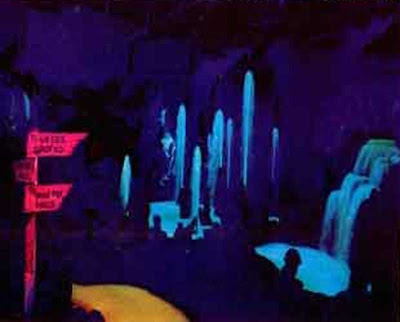 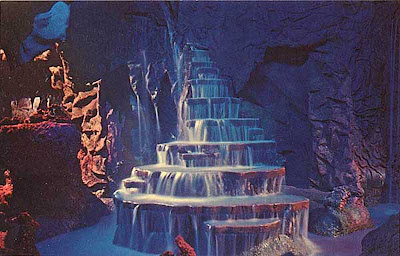 Rainbow Caverns was the amazing two minute dark ride finale of Nature's Wonderland. Largely unchanged from its original 1956 version, the Claude Coats designed caverns featured remarkable flowing water effects using ultra-violet light and dye-tinted waters. The black light effects were dazzling but almost impossible to photograph with the technology of the times. As a result, very few photos exist from inside the caverns. There were indeed 22 magnificent waterfalls and geysers. 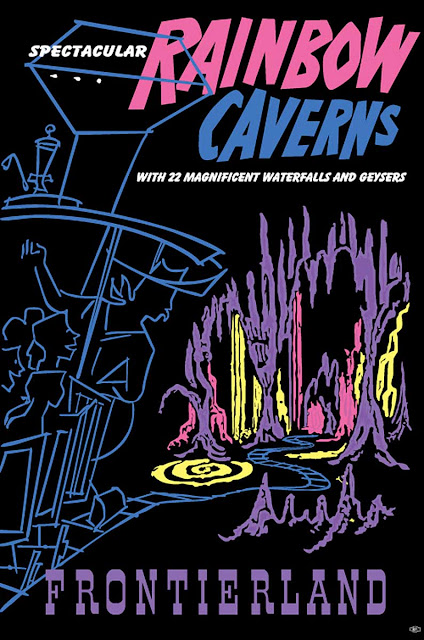 Then it's back into the blazing California sunshine as your train emerges from the tunnel completing the circuit back to Rainbow Ridge.

We hope you have enjoyed your trip into Nature's Wonderland. Please remain seated until the train comes to a complete stop. Lift the jump seat in the middle of the car and the door will automatically come open. Thank you for joining us!

End of an Era

The Mine Train Thru Nature's Wonderland operated daily at Disneyland from June 1960 until New Years Day, 1977. The attraction was demolished to make way for a new mine train themed roller coster attraction called Big Thunder Mountain Railroad which opened in the summer of 1979. Declining ridership and changing public tastes are the reasons most often sited for the change. Some of the Rainbow Ridge structures were saved and relocated in the new boomtown of Big Thunder (often still called Rainbow Ridge by those both inside and outside the Mouse). A tribute to the Rainbow Caverns section of the ride was created on the first lift hill of BTMRR but the effects are achieved in a different and less spectacular fashion. Some other bits and pieces of Nature's Wonderland still survive in the north end of Frontierland, mostly in the form of rock formations and old tunnel portals along the Big Thunder Trail and at Big Thunder Ranch. Cascade Peak survived the end of the Mine Train for many years, continuing to roar and recycle the green-tinted water of the River's of America. It finally succumbed to old age and a lack of regular maintenance and was completely demolished in 1998.

Before embarking on my adventures in Thunder Mesa Country I had seriously considered building a model railroad that more exactly recreated the Mine Train Thru Nature's Wonderland. I created two plans for a model, one in On30 and another in tiny HOn30 (HO scale 1:87 trains running on 9mm N gauge track). The HOn30 plan was by far the best and I offer it up here, free of charge, to anyone who might wish to build their own version of Nature's Wonderland. 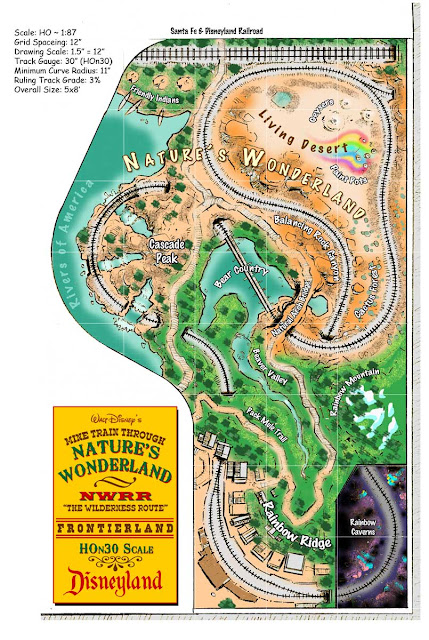 While my model of Nature's Wonderland never got beyond the planning stages, another young man with a strong affinity for Disney trains has gone much further. Sam Towler has been building a wonderful On30 version of Nature's Wonderland for the last several years; filled with animated animals and creative lighting effects. I've been a follower of his fascinating blog for years and anyone with an interest in Disney history and fine model railroading should definitely check it out: nwrr.blogspot.com

Most of the information in this post came from issue 29 of The "E" Ticket magazine, now, sadly, out of print. Additional sources of information are yesterland.com, davelandweb.com, and gorillasdontblog.blogspot.com. The rest is from my sometimes faulty memory. Any errors are all mine.

Hope you enjoyed this trip back in time to Nature's Wonderland. Memories of that long missed attraction continue to inspire and inform my modeling to this day. Adios 'till next time!