Putting the Rainbow into Rainbow Caverns


Most scenery and effects work is now complete on the upper section of Rainbow Falls, a major scene within Rainbow Caverns, and I'm excited to share the results today in a new post and video log. Tried and true "illusioneering" and stagecraft was used to bring this scene to life with a major element being the "Pepper's Ghost" rainbow effect in front of the falls. Check out this month's video log for a rundown on how the scene was created, and follow along with the photo's below for a more in-depth explanation.

Some representation of Rainbow Caverns has been part of the plan for Thunder Mesa from the very beginning. In fact, it goes back even further, starting with early plans to model Nature's Wonderland, and then on to my HO and On30 Big Thunder & Western layouts. At long last I'm getting around to the real magic at the heart of this model railroad and having a wonderful time playing with miniature versions of some of those classic Disney effects. The Rainbow Falls scene is achieved with a combination of ultra-violet light effects and the classic Pepper's Ghost illusion. 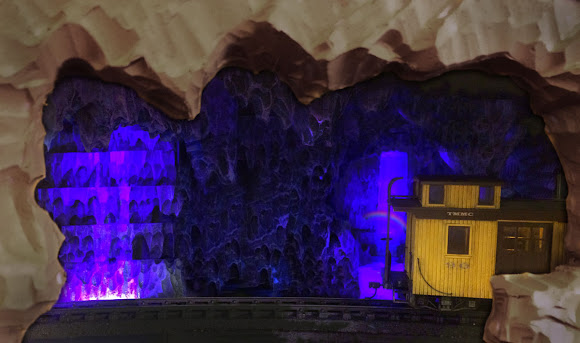 Down below Rainbow Falls where the track crosses the creek on a stone bridge, there will be a series of deep pools, each slowly changing color as the magical waters drip down from above. Beyond the falls will be a Crystal Grotto, dancing with light. And let's not forget the Bat Cave with its hundreds of shining eyes. Yes, there's much more to come in Rainbow Caverns! But that will have to do it for this time. Thanks for checking in, Amigos. Adios for now!
Posted by Dave Meek at 4:56 PM No comments:

A Quick Look Inside Rainbow Caverns


Once again, I'm back to work on Rainbow Caverns, bringing the "dark ride" portion of the TMMC to life. I'm currently up to my elbows in wiring, LEDs, and black light paint but plan on publishing a full step-by-step and how-to post in about another week. In the meantime, please enjoy this short video highlighting some of the effects in completed scenes thus far. Adios for now!

*Note: Original Disney soundtrack has been replaced by royalty free music from YouTube.
Posted by Dave Meek at 11:20 AM No comments:

The Story of Hanging Rock: Part I


About halfway down the line between San Lorenzo and Thunder Mesa is the whistle-stop burg of Hanging Rock. There's a water tank there, and an old combine repurposed as a depot, but not too much else. In recent years, the labyrinth of canyons, caves and rock ledges have become a haven for horse-thieves, rustlers, bandits and other unsavory types. Before the coming of the railroad, it was an Indian stronghold, a natural rock fortress where a handful of braves once held off an entire regiment of U.S. soldiers. Legends of lost Spanish gold lured a few hearty prospectors to the area but they didn't find much and now their old, abandoned diggings dot the cliff-sides. The height of prosperity arrived with the railroad in the late 1870's when a construction camp was established there for bridges being built across Horse Thief and Coyote Canyons. A couple of enterprising old railway men named Olson & Furlow opened a saloon and small store for the camp workers and it still stands between the tracks today, a haunt for outlaws and the only going concern left in town. Hanging Rock is a good place for an ambush or a hide-out and most decent folks don't stay long.

With all of the mainline track now laid and a good start made on the branchline up to Big Thunder Camp, I've decided to dive right in to the scenery at Hanging Rock. As usual, I'm roughing everything in with layers of 1" thick pink polystyrene insulation foam held together with Powergrab adhesive and pins. I really want the cliffs to tower above the trains here. The dramatic sandstone ledges overhanging the track are what give Hanging Rock its name. Unlike some other scenes on the layout, Hanging Rock has no corollary at any Disney park. I wanted to do something entirely original here. Still, the scene is being designed with the same playful spirit and attention to story in mind.


The next step in building Hanging Rock will be to skin the foam with rocky-textured Sculptamold and add a few Balsa Foam detail carvings. Then the tunnel portals and interiors will need to be detailed and all of the rock work painted. After that, the structures get finished and ground cover, plants and final details will be added. There's always lots to do on Thunder Mesa so I'd better get cracking! I'm happy with the start I've made on Hanging Rock and very excited to finally be adding some scenery to the long-planned expansion areas. Thanks for checking in, amigos. Adios for now!

Click here for part II
Posted by Dave Meek at 3:31 PM No comments: