I've fallen a bit behind in updating the blog but the good news is that a lot has been happening out in Thunder Mesa Country!


Building Dinosaur Gap and a base for Baxter's Butte

Much of the work over the last two months has been centered around the left side of the layout where the track makes a sweeping S-curve before plunging into Rainbow Caverns. I'm calling this scene "Dinosaur Gap" because of the T-Rex skeleton that will be exposed just above the track grade, somewhat similar to the scene below at Disneyland. 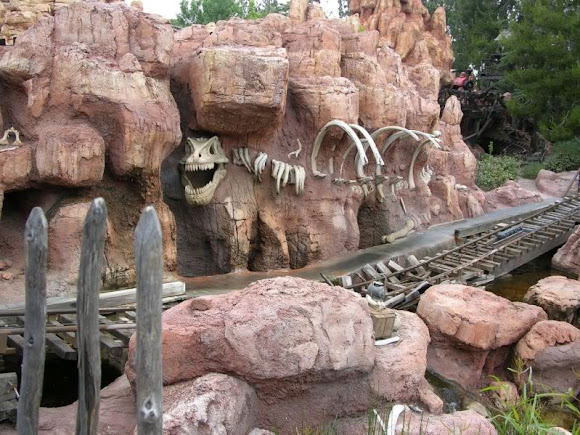 My dino hasn't been installed yet, but I've laid the groundwork for the scene, while at the same time finishing the tunnel entrance to Rainbow Caverns and adding a solid base for the removable upper section of Baxter's Butte (AKA Big Thunder Mt). Here's a photo progression of the scene as it takes shape.

I'm a firm believer in using paper mock-ups to test structure size and placement. It's a lot easier to make changes to a scene at this stage than after detailed structures have been built and placed.

Since my railroad represents a fictional prototype for the Big Thunder attractions it frees me up to design things that look as if they could have inspired Disney Imagineers without being direct copies of what is found at the parks. My goal is to create designs with a strong "family resemblance" to the Disney trains while still looking as if they could actually have existed on a real world railroad somewhere.

In my universe, the Thunder Mesa line was a down-on-its-luck ore carrier that was discovered and saved by railfans and tourists. While it still moves ore from the mines from time to time, its main business has shifted to providing scenic rail excursions through the spectacular natural wonders of the Thunder Mesa area. So, my thinking goes, how would an old mining line shift to carrying tourists? Well, by converting old ore cars to excursion cars of course!

Well, that's enough for this time. Next update I'll be painting track, adding some line-side details and who knows what else. 'Till then, happy trails!
Posted by Unknown at 2:05 PM