The latest rolling stock acquisition on the Thunder Mesa Line is a pair of Bachmann's On30 Billmeyer & Small 18' Boxcars. These are nice looking, free rolling cars that come with Bachmann's EZmate Mark II couplers installed. Like the other Bachmann On30 freight cars, adding Kadee #5 couplers is an easy, drop-in upgrade. At a scale 6' 3" wide, these cars about a foot narrower than Bachmann's earlier On30 cars, and their hunkered down, chunky appearance is a perfect match for the Bachmann Porter. On my postal scale, each car weighs in at 3.4 ounces and they track well, having no trouble negotiating the TMMC's 15" radius curves. They could probably handle 10" radius curves without difficulty, making them ideal for smaller layouts. They are sold in sets of two cars, painted mineral red with white data lettering, but otherwise undecorated. Even the tiny "Billmeyer & Small" lettering is crisp and clear. Each car comes with two sets of freight doors, one framed and one unframed, making it easy to customize the look of each car. The freight doors slide open to reveal a nicely distressed and weathered "wood" floor. The old style, low frame arch bar trucks are entirely new and a really nice touch with 18" diameter blackened metal wheels. These cars are just one set from a complete line of new 18' narrow gauge cars by Bachmann that also includes both high and low side gondolas, flatcars and tank cars. Each car is closely based on prototype Billmeyer & Small designs. 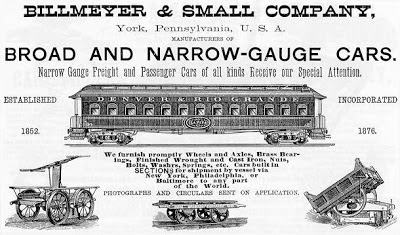 Billmeyer & Small began building railway cars in Pennsylvania in 1852, at a family factory that also built doors and sashes. They later became known as the York Car Works, after their location in York Pennsylvania. The Denver and Rio Grande ordered 100 4-wheel cars from the works in 1871, ideal for the new, light, 3' gauge lines being built in the West. Many more orders would follow and, within a few years, Billmeyer and Small was on their way to becoming the preeminent builder of narrow gauge equipment in the late 19th century.

I'm really impressed with the look and quality of these 18' Bachmann cars and will be eager to add more of them to the Thunder Mesa roster.
Posted by Unknown at 5:09 PM