Nearly all of my hobby time this past week was dedicated to scratch-building a small depot for Thunder Mesa. I described how I built the depot platform in last Monday's post, and today I'll be showing how the building itself was constructed, primarily from illustration board.


The design is freelanced, going for a general look of western "railroad-y-ness," but I also wanted a strong family resemblance to the Frontierland Station at Disneyland (an accurate model of this structure is planned for a later section of the layout). Last year I created a set of plans for the Frontierland Station for an N scale layout. Based on actual park blueprints and historic photos from the 1950s -'60s, the plans are as accurate as I can make them.

As small as the Frontierland Station is, it's still too big (in O scale) for the location in Thunder Mesa where the depot will be located. Using strong rooflines, color scheme, and Victorian details, my depot will look like something of a little brother to this one.

As usual, this structure project began with a paper and card-stock mock-up to test dimensions and clearances. I had a very solid idea in my head of what I wanted so I didn't bother drawing out a full plan. 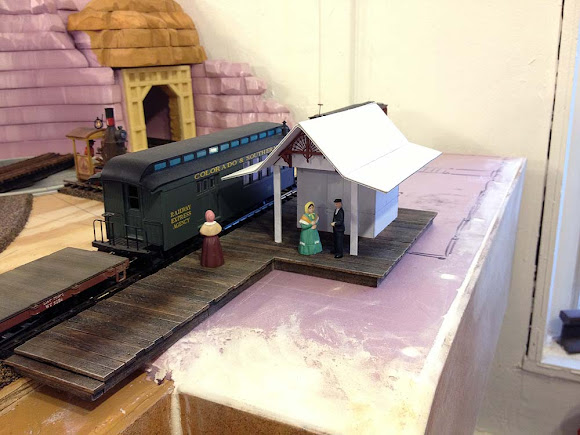 At Disneyland, most buildings are less than full size, and the upper stories are even smaller, using a forced perspective that makes them appear charming and intimate. But forced perspective actually works in reverse when looking at a model at or near eye level. Structures will have more charm if they are built small and tall. With that in mind, a scale foot was added to the building's height based on the looks of this mock-up.

Building With Illustration Board

I chose 16ply Crescent 300 cold-pressed illustration board for this project. It has a lightly textured, off-white surface that can be scribed, painted and detailed to look like a variety of surfaces. It cuts easily with a hobby knife and results in a more organic looking finished structure than you might get using styrene. The 1/16" thickness translates to 3 scale inches in O scale.

Okay! It's been a whirlwind of modeling activity lately and I'm looking forward to finishing the depot in the coming week, adding loads of details, flickering LED lantern light and digital sound. Thanks for stopping in!