Now that the main loop of track is complete and running&nbsp I thought it would be fun to add more visual interest with a second train shunting automatically back and forth on the station and mine spurs as the first train racks up miles on the main loop. To accomplish this, I picked up a Circuitron AR-2 auto-reverse circuit at my local hobby shop. 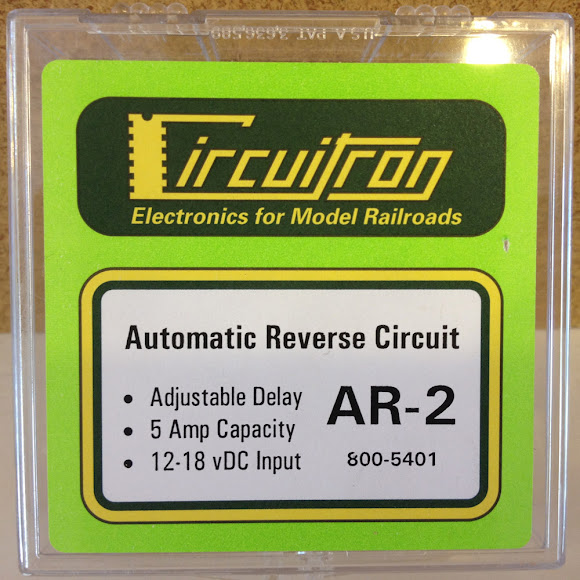 The AR-2 comes complete with a pair of optical sensors that must be installed between the ties at either end of the train's run.

Now, wiring and electronics are probably my weakest skills in this hobby, but I was able to follow the simple instructions and diagrams without trouble and the installation went off without a hitch.

The two optical sensors are installed in the desired positions on the layout and then wired to the circuit board. Power feeders are soldered between the rails and the board and then between the board and a DC power pack. The final step is to attach power to the unit from a 13 to 18 volt AC or DC power source. I used the 18V AC terminals on an old MRC power pack (note that exceeding 18V AC will most likely burn up the unit and void the warranty).

A great advantage of the AR-2 is that you can set a timed delay at each stop, from a few seconds to a few minutes. I set mine to delay about 20 seconds at each stop.

I should mention that since this is basically just an automated polarity reversing system it is only useful with DC systems and will not work for DCC. Of course, I'm a big believer in having my cake and eating it too so I'll be wiring the layout for both traditional DC and Digital Command Control. When all the wiring is done I'll be able to flip a switch or two and choose between automation like this, DC cab control or full DCC. If I do it right, I'll even be able to operate some blocks on DCC and others on DC.

I tend to put off wiring projects as long as possible but this one only took about an hour to complete and now I have two trains running on Thunder Mesa! Thanks to Circuitron for creating a great product that has me excited about other automation and animation possibilites for the railroad. More to come!

Update 9/7/2013:
Although the Circuitron AR-2 has performed flawlessly, I am no longer using it on the layout. As the railroad has grown, my focus has shifted from simple display to more realistic operation and I'm now using DCC to run trains almost exclusively.  The AR-2 unit has been uninstalled from the layout, but I may bring it back in the future to automate trains on the upper level On18 Calico line.