A Backdrop for the N Scale Pagosa & Southern 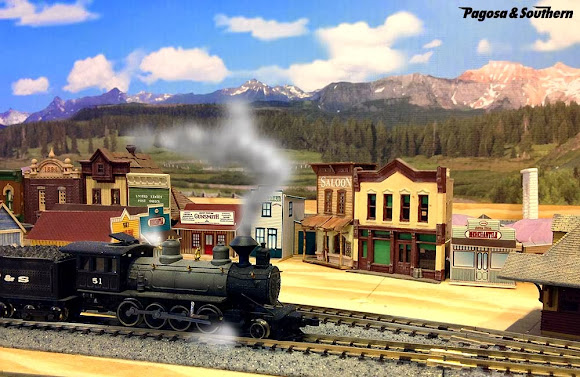 With the benchwork finished and the Kato Unitrack in place, the next project I wanted to tackle on the P&S was the backdrop. It's much easier to install a backdrop at this stage and having one in place early on really helps set the stage for the scenery to come.

For this project I designed my own backdrop in Adobe Photoshop, blending together several photos taken on trips to southwestern Colorado. Sharp eyed rail fans might be able to pick out a few well known narrow gauge landmarks like Red Mountain, Animas Forks and Lizard Head Pass.

Once the design was complete, I sent the digital file off to be printed by a commercial firm that specializes in banners for trade shows and point of sale. It was printed on 13oz vinyl scrim making it waterproof and durable; important considerations with the scenery as yet unbuilt. Turnaround was fast, and the entire cost was much less than commercially available backdrops.

Getting the entire backdrop installed took a little less than an hour. (In fact, it has taken longer to write this post about it than to actually do it!) I'm really happy to have this done because it already adds so much to the railroad.

Starting on Some Scenery

While I was waiting for the backdrop to arrive from the printer, I went ahead and started roughing in the scenery around what will become Wolf Creek Canyon.

Well, that's about it from N scale Colorado! Thanks for checking in. More progress across the aisle in On30 Thunder Mesa Country coming real soon. Adios for now!
Posted by Unknown at 4:49 PM